D2N2 is currently consulting on the new Strategic Economic Plan (SEP) for Derby, Derbyshire, Nottingham and Nottinghamshire. This Strategic Economic Plan aims to close persistent productivity gaps to create a stronger foundation for wages, living standards and opportunity through long term action and investment. It takes on a long term innovation-led approach to improving the productivity of firms and prosperity of the area. It aims to promote economic resilience so the economy can navigate the uncertainties and opportunities arising from the UK’s altered relationship with the European Union and global trading partners.

This document is the economic blueprint for the D2N2 area until 2030. It forms the basis for future investment decisions by the LEP and its local partners.  The SEP gives national recognition to the importance of Derby’s economy, identifying key investments in the City expected to make a significant contribution to the sub-regional economy.

The strategy has 4 core elements focusing on:

Derby City Council’s collaboration with the D2N2 LEP in the last five years has been crucial to accessing funding – particularly from the Government’s Local Growth Fund – to invest in projects such as the One City, One River flood defence works; Infinity Park Enterprise Zone enabling infrastructure; and City Placemaking public realm improvements.

Alongside establishing and funding LEPs and delivering the Local Growth Fund, the 2010 Coalition Government also announced a new generation of Enterprise Zones (EZs) in the 2011 Budget. EZs are designated areas of employment land where special fiscal policies apply – business rates relief or enhanced capital allowances – which are designed to encourage business growth. In the 2014 Chancellor’s Autumn Statement it was announced that Infinity Park Derby – a 68 hectare commercial and technology park – would be designated as an Enterprise Zone, in recognition of its unique position to deliver economic growth, situated adjacent to Rolls-Royce’s Sinfin campus, the global HQ of its civil aerospace business.

Derby sits at the heart of the country and is a core hub of the wider Midlands economy. The Midlands Engine is a government-backed coalition of nine Local Enterprise Partnerships, local authorities, businesses and universities across the wider Midlands region – established in late-2015 and focused on opportunities for collaborative working and strategy to boost productivity and growth in the heart of England.

The coalition has identified five core themes for the future of the Midlands economy:

The Government’s March 2017 Midlands Engine Strategy brings together a range of committed and future capital investments across the wider region under a series of similar themes.

The work of the Midlands Engine coalition thus far has provided the opportunity to highlight and promote the role and value of the City of Derby at a wider level – and align the City’s growth activities with the network of other towns and cities in the Midlands.  For example, Derby is identified as one of the three Midlands Engine clusters of business and innovation activity – focused around its rail and aerospace industries – alongside Leicester’s space cluster and the automotive industry in Coventry. 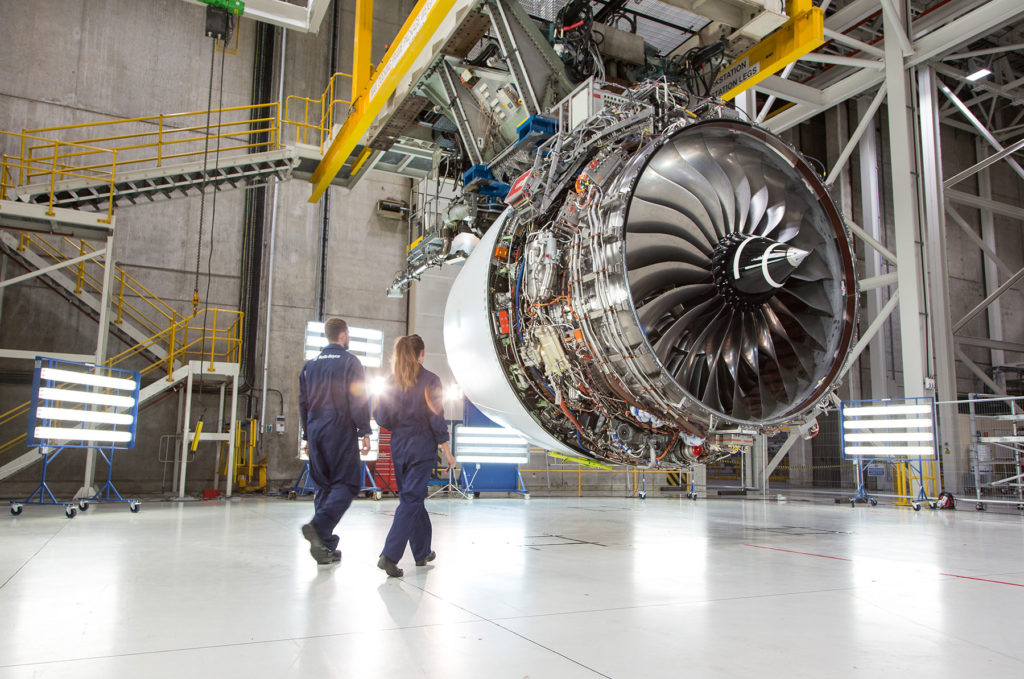 As the UK economy has recovered to modest growth and the mechanisms of devolution have now been established and implemented in numerous places across the country, national economic policy has added a focus on improving productivity across the country. The white paper Industrial Strategy: building a Britain fit for the future (HM Government, Nov 2017) sets out a long-term plan to boost the productivity and earning power of people throughout the UK.

The Industrial Strategy looks beyond short-term economic growth – reflecting on the comparatively strong national economic growth and employment levels in recent years – towards the UK’s long-term productivity challenge. The per worker and per hour productivity of the UK economy has been behind the USA since the 1970s, and has fallen back behind international competitors such as Germany and France since the last recession[i]. Government is also particularly concerned with the widening productivity and wage gap between different parts of the country – both between London and the regions, and disparities within regions, for example between Derby and the rest of the East Midlands. Productivity levels (GVA per head) in the East Midlands rank in the middle of the UK’s twelve regions; but they remain around 20% below the national average and well below London and the South East[ii].

As well as setting a path to improved productivity, this Industrial Strategy sets out four areas where Britain can lead the global technological revolution. These four Grand Challenges are in putting the UK at the forefront of the artificial intelligence and big data revolution; maximising the advantages for UK industry from the global shift to clean growth; being a world leader in shaping the future of mobility; and harnessing the power of innovation to help meet the needs of an ageing society.

The Derby Economic Growth Strategy has been devised after careful reflection about how best to align our approach to the wider context in the sub-region, regionally and nationally. The following diagram and a table demonstrates this strategic fit. 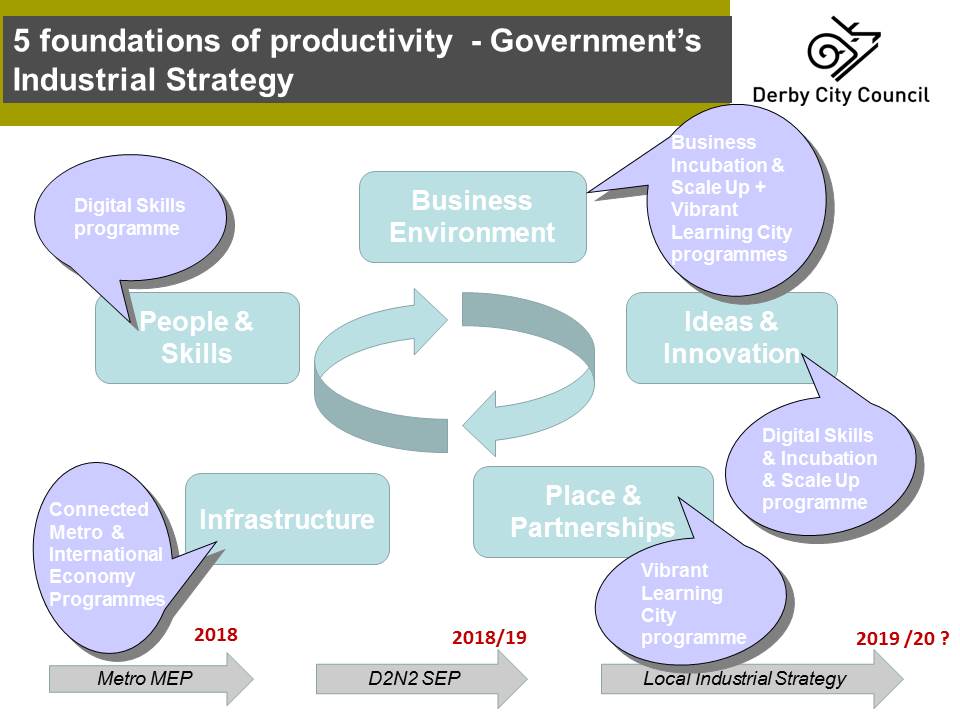 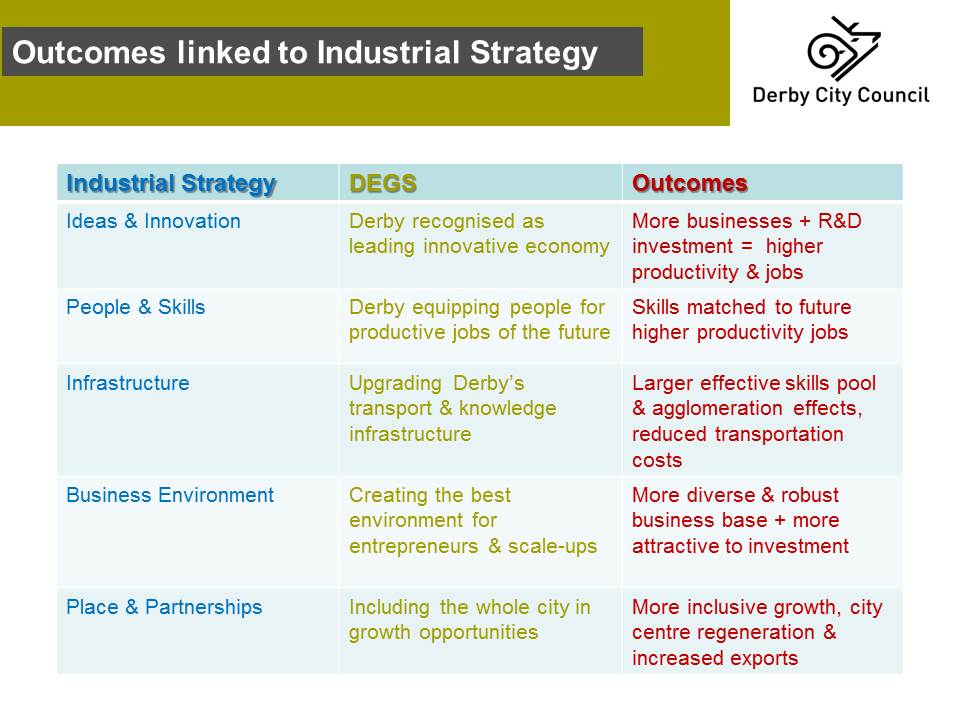